The plugin is designed to create various types of barcodes in CorelDraw. Unlike standard tools, all codes are formed in a vector form, preserving nevertheless data encoded in them, thus providing the possibility of editing in the future.

After installing the plugin, a new Barcodes item appears in the Windows > Dockers > ReproScripts menu allowing you to open the docker.

At the top of the docker there is a list of barcodes that can be created. The value to be encoded is entered in the text field below. Different barcodes support a different set of characters. If the field contains characters that are invalid for this code, then it is highlighted in red.

Common to all barcodes is the section Appearance, which allows to set the color of the background and lines in it, as well as the angle of rotation. Individually for each type of code, additional parameters are available, allowing you to control the process of their formation.

How to create a barcode 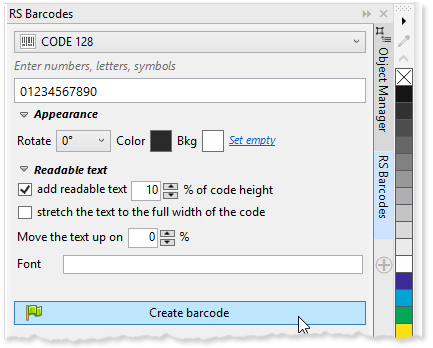 After setting the desired values, the Create barcode button is activated, clicking on which you can form a barcode. The plugin will create a new document if there is no active one at the moment. The new barcode is by default placed into the center of the page. But if there is a CorelDraw shape selected, the plugin will take its size, position and rotation angle and apply these values to the newly created code. This allows to easily manage the size and position of codes in the design.

Each barcode, prepared by the plugin can be edited later. If it is selected in the document, additional buttons Pick up and Update appear in the docker.

The Pick up button allows to read and load from the barcode in the docker. After making changes, you can click the Update button and a new the barcode will be replaced with new one. This way you can easily edit barcodes without having to re-enter the data encoded in them every time. 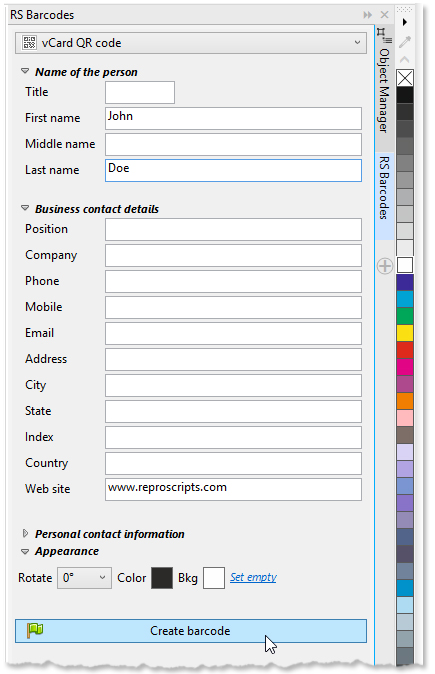 To create a new vCard QR code select the last item in the list of supported barcodes and fill in the required information. It is mandatory to fill a name, without it it is impossible to create a vCard code. The code can also be filled with business and personal contacts. The process of forming and editing is similar to working with other types of barcodes.